Phrase popularized by federal NDP Leader David Lewis1 during the 1972 Federal Election. It described the a political and economic regimen that Lewis and the New Democratic Party felt benefited corporations over individual, and specifically working class, Canadians.

The term proved an immediate success for Lewis and the New Democratic Party, giving them the balance of power in the nail-biting aftermath of the election2 for the first time. The result was a Minority Parliament with two seats separating Pierre Trudeau’s Liberals from Robert Stanfield’s Progressive Conservatives.

In more generalized use, the term has come to refer to any group or corporation that seeks to gain increase its financial holdings at the expense of the economy or job creation. It has also come to be seen by some as a term that encapsulates the high style of the Canadian Left when it is at its most defiantly populist. It is also a fitting update of the imagery of the Family Compact [see Family Compact]. 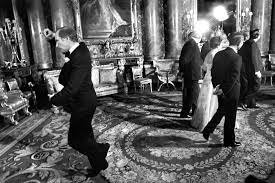